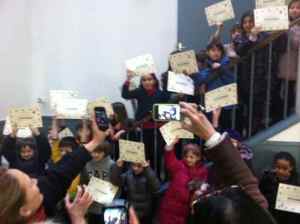 Results of the Preliminary Written Round
February 4, 2012

Almost 100 children in grades CE2-4eme (3rd-8th grade) packed a gymnasium at Ecole Sainte Catherine in the 5th arrondissement on one of the coldest mornings of the year for the Preliminary Written Round of the Paris Spelling Bee.

Congratulations to all the students who registered, studied and came to the Preliminary Written Round.

Below are the groups of finalists chosen for the Oral Finals, which will be held on Sunday, March 25, 2012 (10-16h00 approx) at the American University of Paris. There will be a mock/practice session on Sunday, March 11, (10h00-13h00) for all the finalists to learn useful tips on oral spelling bees, review contest rules and have a chance to meet fellow participants. This event will also be held at the American University of Paris.

Below are results for the Cheetahs division:

IMPORTANT: Finalists will have until Thursday, February 9 at15h00 to confirm by email to parisfrancespellingbee@gmail.com their participation in the Oral Finals of the 2012 Paris Spelling Bee. They must also pay their registration fees, as indicated on the registration forms. Deadline for payment of registration is Friday, February 10.  If there is no confirmation and payment, that spot will go to the next person with a qualifying mark. (Checks payable to Gifted in France, 39 ave de Versailles, 75016; same fees apply as the registration for the Preliminary event: 12 euros per child, 8 euros per each additional child in the same family.)
** A new study list for the Oral Finals will be made available to all finalists after February 14.

Thank you to everyone who participated and supported the efforts of the Paris Spelling Bee, especially the American Library in Paris, which has been very generous to the Bee with its space, time and supplies. A big thank you to the committee members who put in countless hours to make the Preliminary Round possible: Ashley Miller, Kim Siew Ngoh,  Jude Smith, Amy O’Hara, Cate O’Connor (on behalf of the Roaming Schoolhouse), Naida Kendrick Culshaw (on behalf of the ALP) and Janet Sahin in the US.

A special thanks to Starbucks for supplying enough coffee for all the parents who waited in the cold gymnasium while their children participated in the event and to Eloise Loh, Hazel Tan and Rani Kumar of the Singapore Club for making sure the coffee was delivered fresh and served.  We would like to thank the Roaming School House for their generosity in sponsoring the venue for the PSB Preliminary Written Round.  Last but not least, thank you to all the volunteers who came to lend a hand to the organizers, ensuring a smooth registration and testing session:  These volunteers include RSH staff Loretta Fox, Jennie Chiang, Sarah Glynn and Eimear Bowden.  Many thanks also to Julie Harris, Frank Connelly, Matt Benz, Chris Wyckoff, Shannon Connelly and Julia Connelly for helping the morning staff and behind the scenes in preparations.

The Paris Spelling Bee is an annual community enrichment event organized by Gifted in France in collaboration with the American Library in Paris, and hosted by the American University of Paris. We are grateful to both of these institutions for their support of the Bee.

Organizers of the Bee

The Paris Spelling Bee is a city-wide enrichment activity open to all children who meet the preregistration requirements. The all-volunteer event is organized by Gifted in France, in collaboration with the American Library in Paris. For more information, contact Helen Sahin Connelly, Coordinator of the Paris Spelling Bee, at parisfrancespellingbee@gmail.com.